Imagine a driver receives a text, the road ahead of them looks clear, so they grab their phone, read the message, and send a quick reply. It takes only a few seconds for them to do this, but when they return their attention to the road, they see that the person in front of them has decelerated to avoid some debris. Having had their eyes off the road, their hands off the steering wheel, and their focus off driving, the distracted driver has no time to react to the unexpected road hazard and slams into the car in front of them. 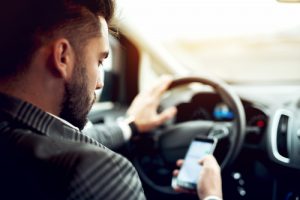 If you have been injured in an accident caused by a distracted driver, call our Morgantown car accident lawyers to discuss your options for filing a claim against the negligent party.

In 2016, distracted driving caused 3,450 accidents resulting in death and 391,000 resulting in injury in 2015, according to the National Highway Traffic Safety Administration. While any activity that takes a person’s attention off driving is considered distracted driving, cell phones – with their constant text, call, email, and other notifications – are particularly disruptive. Unfortunately, even though cell phones can be a distraction to drivers, the number of people who engage in such activity has increased in recent years. In 2015, over 30% of drivers reported sending at least one text message while driving; that is nearly a 5% increase from just 3 years earlier, according to the NHTSA.

In July 2012, texting while driving became a primary offense in West Virginia. This means an officer can pull over and ticket a driver for texting, even if the driver did not commit any other offense. Along with many other states, West Virginia recognizes the dangers of using a cell phone while driving and has joined the fight to combat distracted driving. Senate Bill 211 specifically bans cell phone use while driving.

Any other use of a cell phone while driving was initially a secondary offense, which means that an officer could not pull over a driver simply for using their phone; they first had to be pulled over for another offense, such as speeding. However, as of July 2013, all cell phone use while driving became a primary offense.

Drivers, however, are still able to make or receive a phone call while driving, as long as they use a hands-free device.

FINES AND CONSEQUENCES OF USING A CELL PHONE WHILE DRIVING

Any person found to be using their cell phone while driving is subject to the following, consequences:

Using a cell phone to play games, make a call (without using a hands-free device), check emails, text, or any other activity that requires a driver to hold onto, or engage with, their phone can lead to devastating accidents that have lasting consequences for both the distracted driver and others injured in the accident.

WE ARE DEDICATED TO OBTAINING A FAVORABLE OUTCOME FOR YOUR CASE

Distracted driving is extremely dangerous, and a person who caused an accident because their attention was not on the road has acted negligently and should be liable for injuries and damages that result. Our Morgantown car accident attorneys are committed to bringing negligent drivers to justice. With over 50 years of collective experience, we know how to approach cases to work toward getting fair compensation for you.

At Cranston & Edwards, PLLC, we are committed to holding distracted drivers financially responsible for damages resulting from an accident they caused. Call us at (304) 296-3500 or contact us online for a free consultation.